Peak Seven was busy January 22, 23 and 24, 2010 shooting cinema quality footage of Abu Dhabi based YAS Marina Circuit Top Fuel Dragsters. With a racing background and extreme knowledge of the industry Peak Seven was asked to get the first ever video and still photography of YAS’s all new two car team which cost five million dollars. الروليت اون لاين It began as documentation of the behind the scenes of their Top Fuel Dragster Teams and drag racing in general. The scope of the project grew dramatically, essentially becoming a documentary. From detailed educational aspects such as the car, light tree, track conditions, scoring, hauler, engine and operations to amazing interviews with the who’s who of drag racing such as Don Schumacher, Mike Stewart, Lee Beard all with Don Schumacher Racing who built the teams from the ground up in only two months to Rod “Hot Rod” Fuller and Tommy Johnson drivers of the 8,000 horsepowered dragsters. 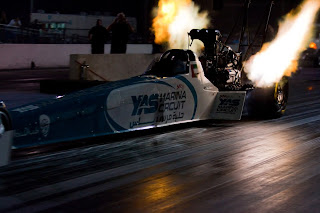 “This was quite a task as we were shooting and maneuvering around the race teams with a sound guy, videographer and photographer all while the teams were working on the cars and testing – it may have been 15 hour days but it was an adrenaline filled time” said Darren Seys, Director of the shoot with Peak Seven.
The YAS Teams were vigorously testing their new teams to get them up to speed before getting shipped over to Abu Dhabi in February (it will take a month to get both teams to the track). العاب على الهاتف The agency was there to document and get footage in order to put together promotional marketing materials and commercials prior to the inaugural race in Abu Dhabi in March 2010. موقع قمار

Learn more at www.yasmarinacircuit.com and be sure to catch excerpts of this amazing footage soon on our Peak Seven blog.